Sustaining the Rehabilitation of Cultural Heritage in Western Balkans 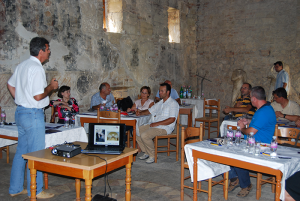 This project was implemented jointly by the consortium composed of Cultural Heritage without Borders, Europa Nostra Serbia, Expeditio Montenegro and Co-Plan Albania. The project was undertaken within the framework of the Ljubljana Process II: Rehabilitating our CommonHeritage, a project financed by European Commission through Regional Cooperation Council (RCC), and implemented by Regional Cooperation Council Task Force for Society and Culture (RCC TFCS), and technical assistance provided by the Council of Europe.The focus of the project was to develop site management plans with relevant training for 7 heritage sites in the Western Balkans. The geographical scope of intervention included 7 countries and 7 heritage sites: The Archaeological Park of Apollonia, Albania; The National Library/City Hall, Bosnia and Herzegovina; Roman City of Sisicia, Croatia; Archaeological Site of Heraclea Lyncestis, FYR of Macedonia; Gazi Mehmed pasha Hamam, Kosovo; Fortress Besac, Montenegro and Iustiniana Prima/Caricin Grad, Serbia. The project focused on development of a common methodology in the form of a Heritage Management Toolkit (Toolkit). The toolkit has outlined the process of development of plans, and it focused on participatory, transparent and interdisciplinary process that was consecutive in 7 countries. Some of the main results of the process were the delivery of seven (7) site management plans in both English and local language.The process of development of the plans lasted 15 weeks, and it engaged over 160 stakeholders across the regions, who were consecutively discussing the future management of 7 above mentioned sites. The national project leaders assigned by each beneficiary country were involved in the process through quality supervision, advice and continuous support. The plans themselves were developed by 14 local experts, under the auspices of each consortium member, while they were led by 3 assigned key experts.