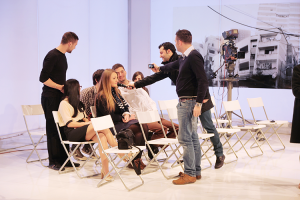 Co-PLAN with the support of the American Embassy in Tirana, in collaboration with POLIS University and Albanian Screen Television, worked for the implementation of the project: “Better Journalism for Citizen Education on Urban Spaces “. The project consisted in organizing a series public debates on matters concerning public spaces, such as private property and the right to develop, neighborhood development schemes, the pressure of urban development and protected heritage sites, etc. The public discussions were prepared in collaboration with POLIS University, and Albanian Screen, and were\ broadcasted over a period of five consecutive weeks on prime television time, under the title ‘Dilema Urbane’.

The programs were moderated by the well-respected Albanian journalist Mr. Aleksandër Furxhi. The project aimed at:
1. Improving civic education on the role and responsibilities of each actor in the process of transformation of the city;
2. Provision of contribution in improving journalism, by offering new models of ‘urban journalism’ that go beyond the political aspect and fun;
3. Promoting public awareness and community values about city-making and transformation of public spaces.

During the project implementation the following results were achieved:
– 5 Interesting topics for urban reality were identified: mobility in the Albanian Cities, the choice to be informal; heritage and pressure for urban development; what should we know before buying a house; what should I know for my neighborhood.
– 9 short “food for thought”, were conceptualized and prepared to raise the public and Media awareness.
– 5 television debates were conducted, in most cases between the Mayors of the Local Government Units, experts, and representatives of stakeholders about the above-mentioned topics.