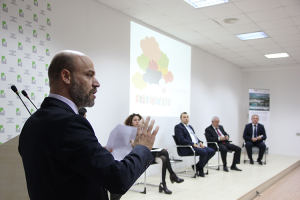 Co-PLAN, in collaboration with the Institute for International Urban Development (I2UD), are implementing the Social Sustainability and Citizen Engagement (SSCE) project, under the Urban Partnership Program (UPP II). The SSCE builds upon the lessons and best practices that emerged during the first phase of the UPP (UPP I), while enhancing the focus on the Citizen Engagement component. The project expanded Social Sustainability Audit in 9 cities in the Western Balkan region to increase knowledge and awareness on social accountability among local stakeholders including civil society, government officials, and marginalized urban residents; and to strengthen integrity in public service delivery by increasing the demand for good governance, social accountability, and civic participation in a regional perspective. The scope of the project for phase II has expanded to include a total of seven countries, namely: Albania (Elbasan), Bosnia & Herzegovina (Tuzla), Croatia  (Karlovac), FYR of Macedonia (Kumanovo), Montenegro (Ulcij and Kolasin), Kosovo (Gjilan), and Serbia (Pancevo and Sabac). The envisaged activities are being implemented in synergy with other UPP II components, such as Integrity Building Initiative, Municipal Self-Assessment and Urban Audit. Apart from coordinating the project at the regional scale, Co-PLAN worked closely at the local level with the Municipality of Elbasan, in conducting a thorough analysis on the levels of social accountability and transparency, including various consultation with the community, in the forms of group discussions, interviews and workshops, concluding by drafting an action plan in tackling challenges and increasing citizen engagement in decision-making.

Co-PLAN contributed for creating an updated analytical and methodological framework and work plan in measuring Social Sustainability and Citizen Engagement in local governance, and the conceptual coordination between UPP II components.The key results for 2016 included: