Policy Document for the Territorial Development of Bushat Commune 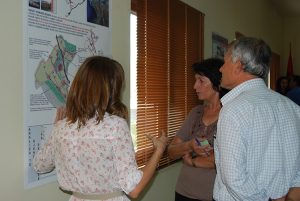 In line with the new territorial planning law in Albania no. 10119 and with the support of the Albanian Association of Communes, the Commune of Bushat initiated, in April 2012, the preparation of the Policy for Territorial Development document. This initiative was supported by the project DAAC Phase – Out, financed by SIDA (Swedish International Development Agency) and was realized by a working group composed by members of  Commune and Co-PLAN, Institute for Habitat Development, which support technically the Commune.

The purpose of the document was:
(1). to complete the legal obligations according to the provisions of Law 10119 paving the way for development of the Local General Plan (LGP) and the territorial planning regulations;
(2). oriented the future territorial, economic, social and environment development of the Commune.

The purpose no.1 was realized according to a well knowledge of the law according to the form and the structure proposed by it. And the second purpose was realized through the recognition of the territory, the study of the existing maps and literature etc. This was followed by the preparation of the Vision for the future development of the Commune.The preparation of the Policy for Territorial Development was realized across a process which has involved in each step the local community through consultative meeting with the interested group and questionnaires realized in a join group work (Commune and Co-PLAN expertise). This document was approved by the Communal Council of Bushat in October 2012.