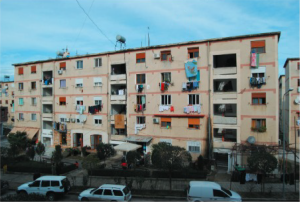 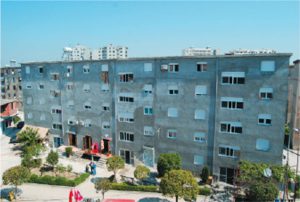 The household sector is one of the top energy consumers in Albania, with 27 % in 2005, and 60% of the electricity demand. Due to its Mediterranean climate, rare extreme temperature fluctuations, Albanian residential buildings bare low levels of insulation, namely: single glazed windows, poorly insulated walls and rooftops, etc. Such features are particularly relevant to the prefabricated residence apartment blocks built during the communist regime, whereby through means of electricity and bottled gas residents adjust to the season temperature. This comes at a high, increasingly unaffordable cost. Up to 2009, lack of competencies and enforcing instruments, meant that municipalities were not in a position to address and resolve energy consumption issues, particularly for the prefabricated residences which were privatized in the early 1990s. Nonetheless, decentralization reforms and a new Condominium law has empowered both municipalities and citizens through ‘council’ structures, clearly outlining the responsibilities of each party, for one common goal.

In this context, through this project, Co-PLAN have endeavored to establish a partnership between civil society and local authorities to:

1) Raise awareness on energy efficiency and cost implications, and

2) Provide an ‘energy efficiency model’ through means of cooperation and shared responsibility.

The project was implemented in the Municipality of the City of Fier and the residents of a prefabricated apartment block in ‘Lagja 8 Shkurti’, by means of increasing capacity at institutional and society level, referring to the new legislation, and general education and training on the issues of energy efficiency. The families residing in the pilot prefabricated apartment block, primarily low-income, will experience reduced costs and a better living environment. The results will be shared with the general public through exhibitions, workshops and seminars, and could serve as a driving force for other municipalities and respective communities to embark on a similar journey.