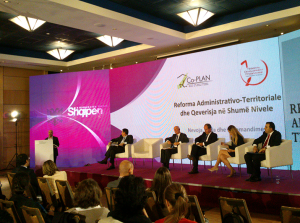 The “Program for Regional Development Northern Albania” comes as an effort to actively support regional development in the regions Shkodra- Lezha, where disparities between urban-rural populations are even bigger. This program is supported by donor agencies in Switzerland, Austria and has a value of over 4 million EUR, to be implemented in a period of 4 years. The overall objective of the program is to clearly contribute to an equitable social and economic development of both regions and, in addition, to support the Albanian’s Government efforts in accordance with the National Strategy for Development and Integration. The program aims to converge national development practices and regulations with those of the European Union, in line with Albania’s ambition to become a future member of the EU.

The program has four expected results:

Although the main partners are the two district councils, namely that of Shkodra and Lezha, RDP has supported national level, local governments, and other local and regional stakeholders. RDP will support legal and institutional framework, regional participatory planning, mid-term budgeting, and the implementation of projects and initiatives with a clear focus on capacity development of partners. Management and the ability to absorb future EU funds will ultimately depend on the capacity of regional councils and local government units to design and manage projects, which is the essence of RDP’s. The Regional Council of Shkodra and Lezha are the direct beneficiaries of the project.

For further information, you are pleased to visit the official website of the project, or alternatively contact us by clicking here.