Places of Diversity – Public Space as a Field of Intercultural Dialogue 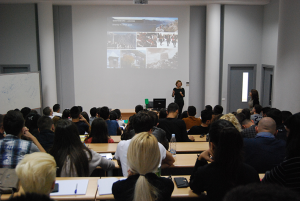 In many Mediterranean cities and towns, especially in less developed democratic systems, public spaces are often commercialized by the private sector. When planning and designing, the focus is mainly on the physical aspect of the design of public spaces and much less on the participation of citizens in the process of their formation or messages that can be sent through them. With this in mind, the idea of the project “Places of Diversity – Public spaces as a field of intercultural dialogue and the promotion of social values” is to inspire those who want to see, in their communities, the promotion of desirable social values, such as understanding, support, love, multiculturalism, respect for diversity, etc.
The pilot activities are being implemented in Albania, Jordan and Montenegro, the principles and ideas of the project can be applied to other cities and towns.

This project is an Anna Lindh Foundation funded project, implemented by Expeditio (lead partner – Montenegro), Leaders of Tomorrow (Jordan), and Co-PLAN, Institute for Habitat Development (Albania). Some of the main activities and results achieved during 2014, were: