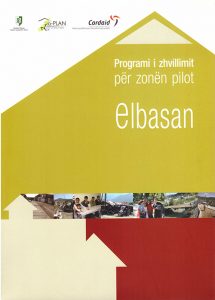 “Pilot Zone Development Program – Lagjja 5 Maji, City of Elbasan” is one of the products of the two-year project “Steps to a Comprehensive Society in Elbasan, Integration of Cities Affected in Urban Development”, funded by Cordaid Netherlands and managed by Co-PLAN, Institute for Habitat Development. This project aimed directly at the realization of activities which positively impacted the integration of the Roma community of the pilot area into the further urban development of the city of Elbasan, creating the inhabitants of the area the opportunity to feel equal citizens of his.

“The Pilot Zone Development Program ‘Lagja 5 Maji'” comes as part of the drafting of the City Development Strategy under the EGUG II program, which also addresses the needs and priorities of the Roma minority, as this minority is represented with 10% of its totality in the city of Elbasan. Within the complex development of the pilot area, the Municipality of Elbasan, Region no. 6, representatives of the Roma pilot community and the Roma Community Center with the support of Co-PLAN took this initiative to draft a basic document that would contain the development priorities of the pilot area for the next 5 years with the ultimate goal of sustainable development at the local level . The following documents were taken into consideration for the development of the Pilot Development Program document: 1) Elbasan City Development Strategy, 2) Social and Economic Survey for the Pilot Area (2007), 3) Infrastructure Development Plan for the area pilot 4) National Strategy for Improvement of Roma Community Conditions in Albania.